Posted on November 7, 2013 by Leah@MyNewEnding
I don’t know if any of you that have been following my blog for a long time remember me mentioning last spring that I was going through something in my family and having to remember that food is not the answer.
For the safety of my family I chose not to mention the issue on my blog.  The issue was … my husband had just deployed.  He is a dentist in the US Navy and last March he left on the 26h Marine Expeditionary Unit for an eight-month deployment.
This past Monday he came home – right on time! 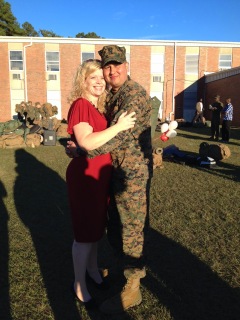 This was our first deployment and while not the easiest thing in the world we’ve ever done we made it through safe and sound.  And now you know why… 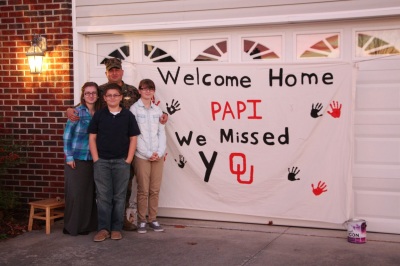 To make it through such a life changing event with my weight still at its lowest is an amazing feat for me.  My kids were great troopers through it all.  The girls put up with hearing more about my weight loss than usual I think and my son was the only male in the house for the duration.  My husband was a great support via email from all different spots of the world and we have actually grown in our marriage as we’ve been forced to deal with some issues in different ways due to the separation.
Things are now beginning to settle back into a normal family routine and I’m so happy.  I’m very proud of my husband for his service and happy to have kids who endured the deployment without causing major upset to our life.  Trust me, not everyone had such smooth sailing (pun intended..he was on a ship..) during deployment.  I am a very blessed woman.
So, thank you for putting up with my minimal blog posting and reading these past months.  I’m hoping to get a little more regular with both from here on out.

I'm a 44-year-old wife and mother who begins her day with God and coffee. When my youngest of 3 kids started college I went from a SAHM to a full-time job. I love being an attendance secretary. A lot has gone on since I started this blog in 2009, but one thing remains the same: I will not give up on my health. Join me as I share what that means for the season of life I'm in.
View all posts by Leah@MyNewEnding →
This entry was posted in Uncategorized. Bookmark the permalink.