Posted on May 20, 2013 by Leah@MyNewEnding
Note:  Exciting news is going to be published tomorrow, so I can share today about my race.  Please forgive me for letting you down. *giggle*

Hello!  So, over the weekend I participated in the 8th Annual Run for the Warriors race.  The race consisted of a half marathon, 10K, 5K and a 1-mile fun run with all proceeds going to support the Hope for the Warriors project.  This was my second year to run the 10K race and it was just as enjoyable this year as last year. 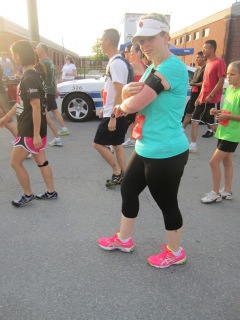 My training for this race went by the wayside during a very busy spring, so I was a tad nervous, but it went fine.  As the race began I was hit with the getting-familiar-to-me feeling of being a loser at the beginning of the race when the crowd surges ahead, and I remember again how not-fast I am.  However, with two 10K races under my belt now I knew better than to be vexed about it.
Yes, I’m always towards the back of the crowd at the beginning, but not even two miles in I start seeing people taking walk breaks.  Then about halfway through I begin passing some people.

Now, please don’t be offended if you’re a runner who chooses to walk/run your races, but my victory in running is to be able to run the entire race.  I don’t care if I don’t have the fastest pace as long as I didn’t have to walk.  I take a sort of pride in seeing others walk (even if they end up running again and beating me) knowing that they may show a faster time, but I am capable of running the entire race.
This race is fun because it’s such a patriotic group of people.  I love the neighborhood it’s run in.  Some people come out and sit in their lawns encouraging us on.  I even saw my friend and her five children out in their yard and it was so fun to wave at them and then hear, “It’s Ms.  Leah running!!!”

(Insert pic of Navy team who chanted and carried a flag during 5K – GO NAVY!!)
Now back to the race…
During the race I enjoyed chatting with some younger ladies and then finished up chatting with another woman I met farther along.  The husband of one of the younger ladies works near my husband, so we exchanged phone numbers and talked about getting together for a run sometime in the future.

My approximate finish time was 1 hour 11 minutes.  I saw 1:11:___ as I was crossing, but did not stay around to see the race results as I had to get home and shower to take my sister-in-law to the airport.

In all honesty, I did have a moment as I was showering where I started to regret not training better and making a better time.  I had to be reminded that I had a great race considering the busy spring lack of training I had.  I met nice people, I ran only 1 minute slower than a year ago and my legs were not dead after it was over.

So, I chose not to dwell on what could have been and instead decided to rejoice in finishing strong.  I also decided that after completing three 10K races I think I may be ready to start trying to train to run it in a faster time.  hhmmm… If I can run it in the same time without training, imagine what I can do if I actually train.
Anyway, it was a good race and a great way to start my day. 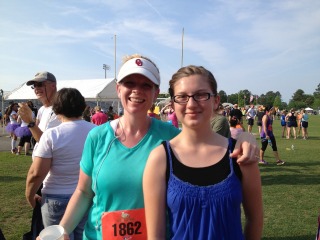 Special thanks to my daughter who offered to get up early and come support me and take pictures.
Sweet girl!  XO

I'm a 44-year-old wife and mother who begins her day with God and coffee. When my youngest of 3 kids started college I went from a SAHM to a full-time job. I love being an attendance secretary. A lot has gone on since I started this blog in 2009, but one thing remains the same: I will not give up on my health. Join me as I share what that means for the season of life I'm in.
View all posts by Leah@MyNewEnding →
This entry was posted in Uncategorized. Bookmark the permalink.